The tale of Stanley Gough, forever resting in Rothesay

This post tells an emotional story that came about by chance, which began with a quest for photographs that connected me with a remarkable 92 year old gentleman in Wales and reveals the history behind a war grave in Rothesay and the bond of brothers that lives on past death.
This blog post is told over 2 parts, firstly because I think it is an important tale to tell and editing it to single blog size would be an injustice and secondly because the story is still ongoing and I would like to finish it with a happy and complete conclusion.

When I first started writing a blog I quickly realised promotion was essential if anyone was to find it among the world of a million bloggers and an overload of cyber information.
Twitter seemed the easiest way to locate an audience that might be interested in my stories and I proceeded to take the social media plunge.  Despite being an initial cynic I have found Twitter has opened my eyes to interesting people and places and every day my mind is expanded and delighted by the informative posts and photographs from those I 'follow'.

Every now and again I have come across tweets that intrigue me and the following simple request from the Scottish Military Research Group did exactly this.  "Rothesay folk please help.  A relative of man listed on this headstone would like to see whole stone and surroundings."

Well, being 'Rothesay folk' and having a curious nature I had to find out more.  The request was accompanied by a partial photograph of a memorial stone dedicated to the crew of MV Fishpool, killed by enemy action on the 14th November 1940.  It was also a post that I couldn't ignore, after all who could deny a request to assist someone view the forever resting place of a relative?  A task that I could easily carry out that might mean alot to this stranger.

So off I went to explore Rothesay High Street cemetery, camera in hand to seek out this important marker among the rows of mottled grey stones and carvings.
Cemeteries fascinate me, to some this might seem ghoulish, however to me headstones read like chapters in a local social history book.  You literally walk through the lives and stories of people from bygone ages, their legacy etched into stone to be discovered and remembered by future generations.

After much searching I came across the grave in question, situated near the bottom of the cemetery looking on to the trees and hills beyond.  I wondered why this stone, erected and dedicated to crewmen from England killed by enemy action during the Second World War stood proudly upright in a graveyard on this west coast Scottish island.  I also wondered which of the 9 names listed had a relative that was seeking them out 73 years later.

I wasn't sure that I would ever find out the reason for the request or the identity of the enquirer but I was still more than happy to help.  I proceeded to take a range of images, hoping that they would turn out well and that the relative would be satisfied with my results.  I e-mailed an assortment of 10 photographs that I was happy with back to the SMRG and nervously hoped that I had fulfilled the task to satisfaction.  They sent me thanks and my quest was complete. 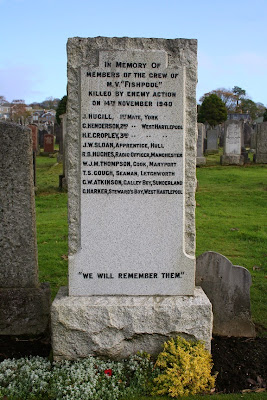 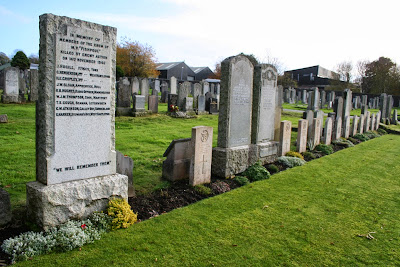 I decided to try and research the fate of the MV Fishpool, however there was very little information that I could find online.  I discovered she was bombed on her maiden voyage in the North Atlantic, the Captain, 10 officers and 16 men were killed.  She was abandoned and eventually towed back to the Clyde, I assumed she was brought to the marine salvage in Bute, hence the connection, however I had no confirmation of this.
I also discovered that having survived this attack, she was bombed a further two times on different voyages, eventually sinking on the third occasion in July 1943.

The following day I was delighted to receive an e-mail from a Mrs Hill saying that she had sent the original request out on behalf of a Mr Winston Gough, who was the younger brother of Stanley Gough, a member of the crew of the MV Fishpool.  It transpires that Mrs Hill is the carer of Winston Gough, now aged 92.  I was very relieved to hear that he was more than happy with the photographs I had sent and they both wanted to thank me.

I could have left things there, after all I'd done my bit and everyone was satisfied but I couldn't help feeling that the most important part of the story was still untold.  The story of young Stanley Gough and the tragedy that robbed Winston Gough of his older brother. The story of a name, on a grave, in a churchyard, on a Scottish island, far from his home.  The story as to why after all these years the resting place of a brother was so important.

It was with much apprehension that I sent a reply to Mrs Hill, asking her if Mr Gough would mind me telling the story of his brother.  Two days later I received an e-mail which I nervously opened, hoping I hadn't offended or upset Mr Gough with my request.  To my surprise the e-mail was actually a series of scanned images of a handwritten letter from Mr Gough himself.  As I read the pages I must admit to shedding a few tears, firstly because I couldn't believe that this gentleman had taken such time and care to write to me personally but secondly because I could tell from his emotional writing that his brother lost to him many years before still meant so much.

This request by no coincidence was made on Remembrance weekend and a few days before the 73rd anniversary of the attack on the MV Fishpool.  'Lest we forget' seems such a fitting phrase for the story of Stanley Gough, killed aged 28, as told by his surviving younger brother Winston which makes up part 2 of this blog...