The tale of Stanley Gough - Part 2

This blog posts makes up the second part on my story on Stanley Gough, to find out the background as to how this post came about please read my previous blog. 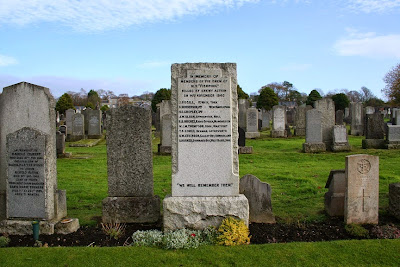 Recently someone posted on Twitter that everyone has an interesting story to tell, this struck a chord with me as I am always curious about people's stories and adventures. Living or not, often the most unassuming person has the most fascinating tales to tell.  In this case an etched headstone and a surviving brother relate the history of a short but heroic life lived to the full.

The following story is mainly told in the words of Winston Gough, the 92 year old surviving brother of Stanley Gough.  I've tried to edit his words as little as possible and only add a few extra details from my own research.

This is a shortened version of his letter to me.  What came across over the carefully handwritten pages is that despite 73 years that have passed, Winston is still very proud of what his brother achieved and his emotion over his loss transcends the decades of time.

'Stanley was always keen to join the Merchant Navy and go to sea.  He left school at the age of 14 which was normal at that time and had to wait another two years before he could enrol in the Gravesend Sea Training School.
In the meantime he worked locally until he reached 16 and had his first posting at sea.  His family did not see him for the following two years and when he returned home the boy that had left had grown into a young man.

Stanley was later to be paid off after a voyage on the cruise liner The Empress of Australia, a time when the Wall Street crash caused a great depression in the 1930s.  This affected many men like Stanley who were involved in sea borne trade and shipbuilding, hit hard by the financial crisis.

Stanley Gough was determined to find work and could teach our generation a thing or two about perseverance to find a job.  He cycled every day to local ports including Cardiff and Barry but the competition with locals who were first to hear of opportunities made it impossible to find anything suitable.
At the time officers were even taking jobs as deckhands just to get a berth.

After 6 months of trying to obtain work at sea he had to enrol on a government training scheme instead and qualified as a carpenter at a training centre in Letchworth, Herts.  Stanley decided to settle in the new town of Letchworth Garden City and succeeded in his new profession.  He became a sub contractor in his own right, married a local girl and went on to have two children.

With the outbreak of war and previous sea going experience Stanley joined the Royal Navy and completed a gunnery course in Bristol and on qualifying took ship on a defensively equipped merchant ship.

In June 1940 while on passage as part of a convoy carrying power station coal from Newcastle to the Thames estuary and the south coast, they were attacked by German torpedo boats and sunk but fortunately he survived.

Stanley was subsequently assigned to MV Fishpool, a brand new ship on it's maiden voyage, sailing alone in ballast for Canada.  After suffering engine failure it was discovered by a German Focke-Wulf Condor maritime recce plane out of Brest and bombed.  Seven out of the eight incendiary bombs struck the ship killing all the crew on deck, including Stanley Gough, and setting the ship on fire.

A life boat with 2 crew members made it to the north west of Ireland, nothing was found of the other lifeboat.

MV Fishpool did not sink and the fire went out and two weeks later it was spotted and towed to Rothesay Bay on the Isle of Bute.  The remains of the crew on board were interred in a double sized grave in Rothesay cemetery and a headstone erected by the Poole fishing company.'

In his letter Winston explains that he was unaware of his older brother's fate until on retirement he had the time to carry out the necessary research.  By this time Winston was the only remaining direct family member and he regrets that his parents and Stanley's widow never discovered the outcome of his research.

I'm so glad I came across the original request for photographs as I feel it is important to remember those that have given their lives so I can now sit and freely type this blog.  I am also glad to find out the story of one of my island neighbours and how they came to be resident on this Scottish west coast Isle.  I will be sure to visit Stanley and his comrades from time to time just to let them know they are not forgotten.

As for Winston Gough, he states in his letter that he would like to visit Rothesay for a holiday and if he ever does I would very much like to meet this remarkable man.  I'm sure after 92 years he has many of his own fascinating stories to tell...